Last Sunday I caught up with Esuna to have a chat and record a short podcast. They’re playing the Oxjam Cardiff Takeover, and were kind enough to agree to be interviewed about their new band member, their new material and the bands you should check out at Oxjam (spoiler: Masts, Safari Gold and How I Faked the Moon Landing).

They’re a great live band, and I last saw them at the Save Le Pub gig a couple of weeks ago. They were part of an amazing line-up that featured Samoans, Kutosis, Mimas and Dad Rocks!, but they more than held their own with a pretty epic live set. 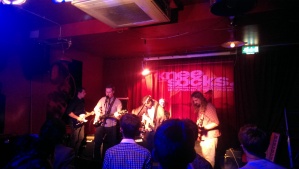 If you’re heading to Oxjam (and you definitely should), then I strongly suggest you check these guys out. In the meantime, check out their new EP on Soundcloud– available soon on Jealous Lovers Club.

Music Bendigedig is a blog about the gigs I (Dyfrig Williams) get to go and see. I’m based in Cardiff, so most of the gigs I go to are here, with a few further afield. I don’t aim to be a critic – this is a music fan’s blog, written from that perspective.
View all posts by Dyfrig Williams →
This entry was posted in Rock and tagged bloc party, dad rocks!, esuna, how i faked the moon landing, jealous lovers club, kutosis, masts, math rock, mimas, music blog, new music, oxjam cardiff, safari gold, samoans, save le pub. Bookmark the permalink.